If you are looking for affordable cloth diapering options, you can’t get much better than flats! They are as versatile as they are affordable, yet equally intimidating. But I promise that once you give them a try, your fears are quickly replaced with enthusiasm for such a trim diaper that can fold to fit any baby of any shape!

So which is the best option?

Which absorbs the most? Which is the most economic? How large are they?

First of all, I purchased all-new materials to compare. Even though I have both Mainstays and Room Essentials flour sack towels, both have changed since I purchased mine a year or two ago. Mainstays has changed the size of their towels from 27″ square to 28″x 29″, and Room Essentials has changed the overall construction of their towels, swapping thicker, 4 hemmed sides for a thinner weave hemmed only on two sides much like Mainstays brand. All were prepped together, which means that even though the flour sack towels only needed one wash, they were washed several times anyways because the Gerber flats required more prepping. They were then measured to compare size.

As you can see, the Room Essentials (Target) Flour Sack Towels shrank from 30″x 30″ to 28″x 29″, the same size as the Mainstays (Walmart) Flour Sack Towels which did not shrink at all. Up front is Gerber’s embarrassingly small flats, which couldn’t afford to shrink more, yet shrank anyways from a measly 24″x 27″ to the sad size of 22″x 25″. At least it shrank consistenly, I suppose…

Overall impression of the material: Gerber produced a world record for “Thinnest Birdseye Cotton Ever”. At least if they haven’t, they sure have in my book. I’ve never seen a Birdseye cotton so absolutely thin and gauzy. Yet I suppose it really isn’t much more gauzy than the Mainstays flour sack towels. They also boast a softness that both flour sack towels lack, although none of these diapering options could be more uncomfortable than disposables. The room essentials flour sack towels I observed as being a slightly thicker material, something best noted in person than on camera (which attests to the slightness of difference).

To test absorbency, I used tested using two methods in the same test, and did this twice. First, I noted the dry weight of each “flat” using my kitchen scale in ounces. Next, each flat was placed in a container and had 10 fl oz of room temperature water poured over top. I used room temperature water simply because it was the easiest way to make sure the temperature stayed consistent with each flat tested. Once it absorbed as much as it could, I lifted each flat, compressed it gently, and suspended it over the container until the dripping stopped for at least 10 solid seconds. I noted the wet weight, took the difference of the wet and dry weight, and multiplied that number by the weight of water (1 oz=1.041 fl oz). This told me how many fluid ounces were absorbed based on weight. I then measured the remaining liquid in the container, subtracted that number from the original 10 fl oz to get the amount absorbed based on volume. I averaged the two numbers to get what I deemed the estimated fluid ounces absorbed. The two amounts determined by weight and volume consistently varied by approximately .3 fl oz, which considering I’m no scientist, I find that both interesting and encouraging! The results? 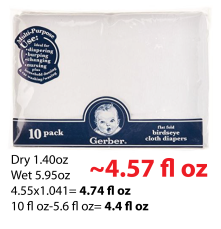 I was actually shocked to see such a distinct difference of almost a solid ounce difference between each brand. After washing them all again, line drying them, and testing them a second time, my results stayed mostly the same. I can’t say I’m surprised that Gerber flats, being so gauzy and significantly smaller, are the least absorbent. Gerber cloth diapering products I’ve tried have always been an abomination to quality, setting users up for frustration and potential failure, thus inadvertently giving a very bad impression of cloth diapering. What is interesting, though, is that if you do the math down to absorbency per square inch, if Gerber flats were the same size as the Mainstays flour sack towels, they would absorb exactly the same amount (my math nerdiness is showing). So even if Gerber tried to improve by simply increasing size, it’s still more economic and worth-while to buy flour sack towels. Why?

Price. It’s that simple. Who wants to spend ~$12.79 on ten Gerber flats when Mainstays sells a 10 pack of flour sack towels for $7.88? Like I said, even if Gerber increased their size and the absorbency faired with Mainstays flour sack towels, you’re paying an extra five bucks for a little softer material. It’s just not worth it for someone on a budget, especially since it’s STILL cheaper to buy even the Room Essentials brand flour sack towels from Target for just $3.99 for a 4-pack.

Which would I recommend? Anything but Gerber. It’s not that Gerber is useless. Someone in need can still use Gerber flats. But if you’re trying to help someone out, you’ll do your wallet and their sanity a favor by buying flour sack towels instead. If your child is a heavy wetter, it may advantageous to invest in the Target flour sack towels. But really, it’s mostly a matter of what is most readily available to you.

I do plan to revisit this in the future! When I do, I’d love to see Gerber have an improved, economic option to try! In the meantime, why don’t y’all let me know how I could improve my results! What would you like to see tested next time? Did you notice a flaw in my approach? Have you tried comparing and got different or similar results? Let me know in comments!

And thank you for the priceless gift of your time and attention! Have a blessed day!