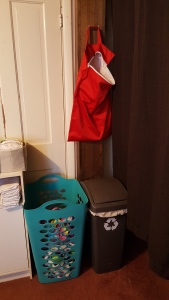 Storing dirty cloth diapers doesn’t have to be all that complicated. There are many amazing products on the market to make storing dirty diapers as stink-free as possible. Anyone who has a baby knows diapers stink, regardless if they use sposies or cloth. You can’t put pee or poop in something and it NOT stink… and while some companies add fragrances to their disposables, those perfumes can be harsh on your baby and, to put it bluntly, aren’t doing a darn thing to help the odor. It’s my opinion that disposables actually smell WAY worse, but that’s just the experience of a mother who used disposables for my first two children and cloth for the latter two. *shrugs*

With cloth diapers, there are wet bags and pail liners made with the same Polyurethane Laminate (PUL) material that most diapers are made with. Hanging wet bags can be draped on door knobs, wall hooks (that are capable of bearing the weight), or any numerous places conveniently wherever you typically change your baby’s diapers. Pail liners can be placed inside a standard hamper or 13 gallon trash can, with or without a lid. Some people don’t even opt to use pail liners, choosing to use just a hamper or laundry basket to maximize air flow to reduce odor. And, of course, on the go, travel wet bags are absolutely wonderful at keeping odors and mess contained in your bag and a must-have in my opinion. As far as odor control, you can often find deodorizing discs dirt cheap or even DIY your own for just pennies. These are often utilized in diaper pails and typically affixed to the inside of the lid to help reduce odor.

So what works best?

This definitely hinges on your individual needs, but having tried all three, I can tell you some of the pros and cons of each. 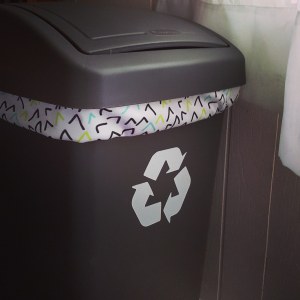 For starters, I typically use a 13 gallon lidded can lined with a pail liner. It’s actually a recycling bin, which I hadn’t noticed until after I bought it and couldn’t help but laugh at the appropriateness of it. While travel wet bags tend to hold up really well without leaks or issues due to their short-term use, I found pail liners have a knack for breeching wetness as the bottom after a couple of days. After repeatedly wiping out the bottom of my can between bag changes, it dawned on me to spare myself the hassle and just line the bottom with an small prefold. EUREKA! Now, if the bottom of the bag gets a little damp, the moisture doesn’t pool in the bottom of the can, it absorbs into the prefold. The prefold gets tossed into the diaper laundry bag once I remove the pail and a new prefold is laid inside before the next pail liner goes in. I have been doing this for over two years and love this system because, even though the pail liner might be slightly wet at the bottom of the bag, it still stays relatively contained. Honestly, a huge part of the dampness issue is my own doing: I don’t always squeeze out diapers after rinsing poop off, I just dump it in. I love having a lid: it really does keep the odor contained. It’s nice to just drop a diaper in and walk away. Typically, when the pail is full enough that the flipping lid will get wedged on diapers inside, that means I have a full load’s worth. While the pail does a relatively good job at containing odors, it just does. not. breathe. This means by day 3, I need to wash diapers whether I have a full load or not, otherwise I wind up with burning eyes every time the lid opens to drop in a diaper. And that odor escapes… the lid opens and the whole room will stink. It only happens if I let it go too long, but definitely not a pleasant experience being met with an ammonia smell. I find this more true now that my youngest is older and has more pungent urine. With smaller babies, I never had the experience of smelling ammonia but that may be largely due to the fact that I was going through so many diapers with two in cloth that I had a full load of diapers every other day. It didn’t have time to get smelly! All in all, though, I am very much in love with my 13 gallon pail with two liners I rotate with a prefold underneath in case of moisture breech.

Considering, however, that I am down to one in cloth and he is now 2 years old (*sob*), I was curious as to how an open hamper option might effect the odor. Would I be able to make it four days and a full load without ammonia burning my nose hairs? I got a standard hamper, lined the bottom with a prefold (as I do my diaper pail and for the same general reasoning), and gave it a try. I won’t lie, it smelled like urine pretty much constantly… not super pungent, but annoying enough that I spent the next four nights and four days listening to my husband complain about the smell and ask if there was anything I could do to make it stop smelling like pee. No poop smell; after all, there was no poop in there, but it definitely smelled of urine. It didn’t bother me nearly like it did him. Frankly, I liked being able to just grab the hamper (it’s a flexible square hamper from Wally World), go down to the machine, and dump the diapers in without having to change the bag out. By day 4, diapers smelled like urine, but not even the tiniest whiff of ammonia was to be had. So while the open hamper concept isn’t exactly odor-free, it certainly reduced the pungency of diapers sitting until day 4. I think this would be an option I’d gladly stick with for it’s ease and for the ability to let laundry go another day, except that it would drive me crazy when my husband incessantly complains about the persistent underlying smell. So… feasible option, especially if you’re just starting out and don’t have the money to get pail liners yet, but certainly not an odor-free option. To me, using an open hamper was reminiscent to putting dirty sposies into an open trash can, only instead of smelling perfumey poop, you’d smell urine. A laundry basket would work just fine, too.

Using hanging wet bags wasn’t a foreign concept to me. When I did my trip to Disney a year and a half ago with two in cloth full time, hanging wet bags were what I used while there. However, a lot can be forgotten about experience in that time, so up went the hanging wet bags to give them a try again. A couple things I do remember from previous experiences with hanging wet bags: 1, I hate single layer PUL wet bags. They, just like pail liners, are prone to dampness or even leaking at the bottom of the bag. 2, and because of 1, I remember having to make certain that any diapers that have been rinsed of poop or were particularly saturated with urine, had to be wrung out before placed in the bag. Because of this, I had invested in Diaper Rite double PUL hanging wet bags. They do not disappoint. They contain wetness without leaks, even when I drop in relatively wet diapers. If you use single-layer PUL hanging wetbags, though, and are having issues with dampness at the bottom, try lining the bottom of the bag with a flat or prefold, much like I do my diaper pail. Anyways, so in using the hanging wet bags again, I recalled how annoying I found it to zip and unzip the bag constantly. This was the main reason I hated using them. For on the go or short term, they weren’t too much of a nuisance to me, but when I consider using them long term, I am really turned off by the idea of constantly zipping and unzipping, especially since doing so gets more and more awkward as the bag gets fuller. However, a huge pro to the hanging wet bags is that mine only held about two days worth of diapers comfortably. Any more than that would strain the handle of the bag too much with the weight of the diapers. This meant that if I wanted to use this option full time, I would need at least four hanging wet bags unless I increased the frequency of my laundry. Well, that doesn’t sound like a pro, what’s the pro? Smell… or lack thereof. Using the hanging wet bags, I didn’t get a single complaint of bad odor from my husband, who, as you may or may not know by now, is very sensitive to those smells. Not only did the diapers not smell the room up, even when I opened the wet bag to put newly soiled diapers in, but the diapers that were in the first wetbag weren’t reeking of ammonia when I opened the bag to dump the diapers into the machine. I have to assume this is because the diapers were still able to breathe better in the wetbag than in an enclosed pail. And because the wetbag was full after just two days, I didn’t have to open it again until wash day anyhow, so even if it did smell stronger after sitting an extra two days waiting for a full load, any odor was well contained in the wetbag, even with the wetbag just sitting in the room on the floor. So, in short, it’s my personal experience that (double PUL) hanging wetbags are the most odor-free option, but also kind of annoying. If you don’t mind zipping and unzipping, they really are very good at containing odor and still allowing your diapers to breathe. I highly recommend double PUL, but single PUL works fine, especially with the added prefold in the bottom as a just-in-case for excess moisture.

There are other options I haven’t discussed as well. Moms can get pretty creative. I know some moms (and I once did as well) who hand-wash their diapers every night, so they just store the dirty diapers right in the 5 gallon bucket they wash in. I did that for the first 4 or so months of cloth diapering. I even seen a video of a mom removing parts from her diaper genie to make it usable for cloth diapers! Popup hampers, mesh laundry bags, get creative!

I do NOT, however, ever recommend using plastic bags, like trash bags, to store dirty cloth diapers in. While my diaper pail isn’t the most breathable option itself, it certainly is far more breathable than a garbage bag in the same pail. Plastic just doesn’t breathe and becomes a breeding ground for bacteria and mold. Some people use plastic grocery bags on the go sometimes, and for a temporary diaper storage situation like that, it’s not too big of a deal (just don’t forget to empty it when you get home!). But really try to avoid using plastic bags to store dirty cloth diapers in regularly.

Do you use a different means of storing dirty diapers? Have a question? What works and doesn’t work for you and why? I’d love to hear! Comment below with your experience! Thank you for your precious time reading and God bless!