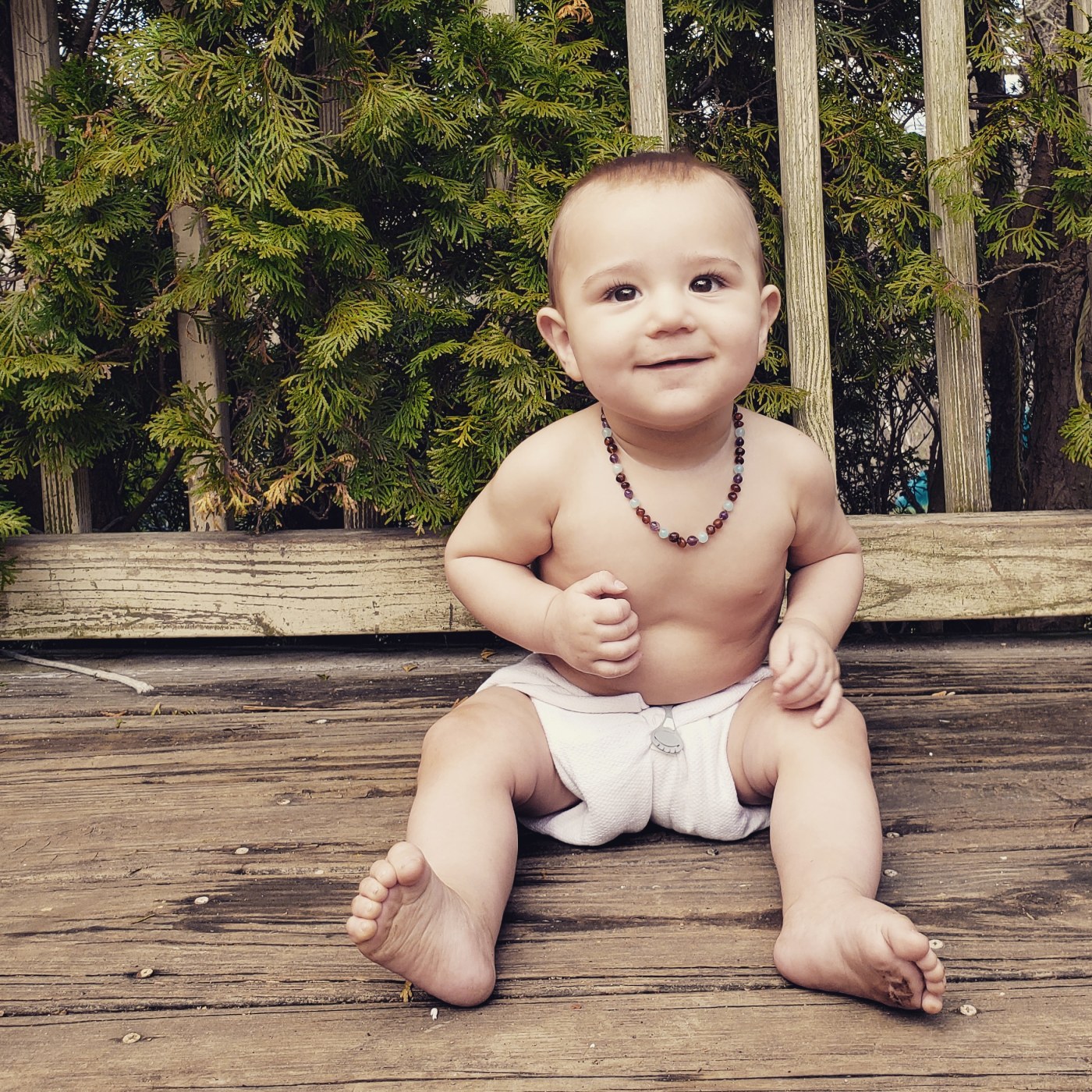 Somebody, please, if you find a valid source for this, share with me. Before you go on your hunt, though, consider these things before you scour studies:

How many times have you heard moms say “well, my baby can grab his feet when he’s naked during a diaper change, but when his diaper is on, he can’t grab his feet. Is cloth diapers inhibiting his development? I’m worried”. How is that missing a milestone or inhibiting development? If you baby can grab his feet at all, he has indeed reached that milestone. Furthermore, the challenge posed by bulkier cloth options means that when your baby begins to grab his feet with a diaper on (because, yes naturally they’re going to reach their feet naked sooner than diapered), he’s developed some serious muscles in order to do so. It’s safe to argue that a baby in cloth that can reach his feet is stronger than a child that can only do so in a disposable or naked. Your baby will take the challenge and will be stronger for it!

Another consideration… you will hear moms discuss how their children in cloth diapers hit milestones both sooner and later. Honestly, none of these are conclusive because each child is so different, even within the same family. For instance, in my own family of currently 5 children, 2 were in disposables, 3 in cloth, the two in disposables were crawling by 8 months and taking their first steps by 12 months while the younger 3 in cloth were crawling proficiently by 6 months and taking their first steps by 8-10 months. One could argue that it proves that cloth diapers promote motor skill development, but that is far from conclusive when considering we’re talking about only 5 children. However, my children certainly don’t feed the narrative that cloth inhibits motor skill development. Going back to the grabbing feet example, I honestly believe that the increased challenge to reach for the feet is part of why my younger children had the strength to sit up and walk when they did compared to their older siblings. For them, the emphasis on learning to walk was primarily on balance, not strength. Of course, these are my own “momservations”. This isn’t conclusive of anything except that there is nothing conclusive out there directly pointing out cloth as an inhibitor of milestone development, as you will always be met with hundreds if not thousands of moms pointing out that their child is an apparent exception.

One study published by NCBI compared walking in infants naked, in disposables, and in a bulky cloth diaper. A snippet from their conclusion: Thirteen-month-olds fell or misstepped on M = 17% of trials while wearing the cloth diaper, 15% while wearing the disposable and 9% while walking naked. Nineteen-month-olds fell less frequently: M = 5% in cloth, 2% in disposable, and 2% while naked.

The number of stumbles for anybody wearing anything bulky is naturally going to increase. Cloth diapers inhibit smoother movement to a degree, especially if they’re particularly bulky. But does this inhibit reaching milestones? No. I hate when people cite this study as an example, because it literally isn’t. They overlooked the simple fact that all these children were, in fact, walking already. That isn’t indicative of development. So why did I bring it up? Moms are concerned about the mobility of their children, but look at the rate of falls or missteps: only a 2% variation between cloth and disposables in 13 month olds and just 3% in 19 month olds. Is that at all an alarming number? Absolutely not. Not even close to concerning. Like I said, it’s natural that wearing bulkier clothing is going to make one more prone to stumbling. Ever see a child in full snow gear trying to run? Even then, the stumble rate is so hardly different that it’s baffling that anybody would think it “proves” one is better than the other.

I asked some of the pediatricians about cloth diapers and baby development… from one, I was explained how cloth diapers can inhibit a child’s gross motor skill development, but when asked if they could cite a study, they said it was unnecessary because it was obvious. Facepalm. He even went as far as to illustrate with words about how anything bulky on a child will pose additional challenges for them that keep them from reaching milestones, and even went as far to say that the same child could otherwise meet the milestone were it not for the challenges presented by cloth diapers. I asked “if that same child is CAPABLE of crawling without a diaper on, but seems unable to wearing a cloth diaper… does that mean the child hasn’t reached that milestone?”. That question made him stop and (perhaps re)think a moment. Conversely, the other pediatrician raved about how cloth diapers were great for babies’ hips, contrary to the popular myth that cloth diapers cause hip dysplasia and/or bowed legs. I asked her if she had any sources she could cite, to which she recommended I check out https://hipdysplasia.org/. I recommend you check it out, too. Did you know, many of us have been swaddling our newborns all wrong! But I digress.

Look, every baby is different. Every mom’s experience will be different. Heck, I thought I knew it all after having one child. Kids are easy! Then I had a second and thought, “yeah I’m practically a child expert now!”. But then came my third child. What a different experience altogether! Maybe I don’t know as much as I thought… then came the fourth. Wow, I really don’t know much about kids! 5 going on 6 children later, and I’m so baffled by how different children are that I’m dumbfounded I ever thought I “knew kids”. My point is only to emphasize that all children are unique and will develop at the rate in which they are able. Some children need extra help in some areas. That’s okay.

Cloth diapers may present challenges for your baby, but in the average child, it will not impede your child’s ability to reach milestones timely. Your child will reach those milestones when they’re ready. You may be tickled to find that your baby suddenly can grab her feet or roll over during a diaper change. Don’t freak out when they can’t seem to do it with a diaper on, though. They’ve reached their milestone, they’re just building the strength still to do it with the added challenge of a cloth diaper. There’s nothing unhealthy about that, either. On the contrary, it’s building their motor skills! It doesn’t mean your child is “slow” to progress. Likewise, cloth diapers are not going to cause bow legs, which is actually normal for children to have as they develop and can last until they’re upwards of 4 or 5, even 8 years old! And they certainly won’t cause hip dysplasia!

What’s been your experience with diapers and motor skill/milestone development?

Thank you for reading! God bless!